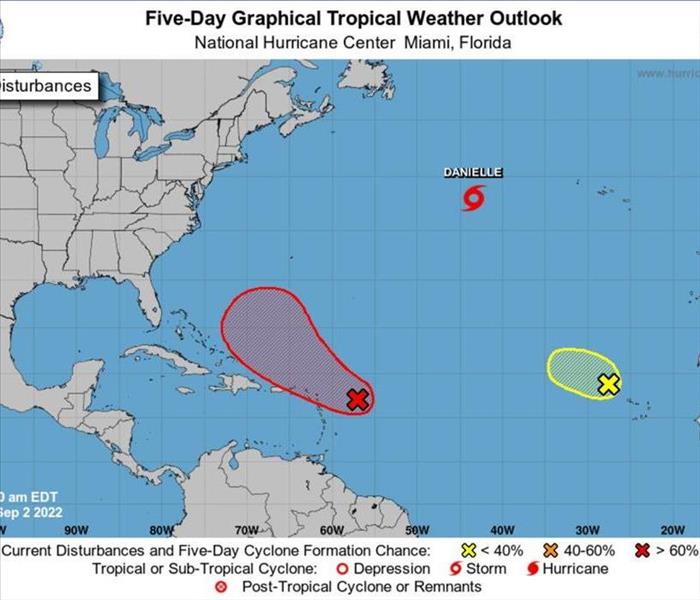 SERVPRO Team Luzzi is available to help when storm damage occurs. Call us 24/7

The Atlantic storm season of 2022 has been unpredictably quiet. For the first time since 1997 there were no named storms in August and until this point there have only been 4 named storms. Tropical Storm Danielle was recently named on September 1st and is only the fourth tropical depression to form in the Atlantic in 2022. Danielle will remain at sea and is not a threat to land. Meteorologist are currently tracking two other storm systems but conditions in the Atlantic Ocean are still not perfect for creating tropical depressions. Although the warm waters of the Atlantic are ripe for fueling hurricane activity the air is dry and dusty which lessens the chances of tropical storm formation. Despite these conditions it is more likely than not that disturbance number one in the image shown will become the fifth named storm of the season, Earl. It is still far too early to tell the path this storm system will take, it is moving slowing west to northwest and it looks like it will pass north of the Caribbean islands. If the storm continues on its current trajectory there is a chance parts of the east coast could be affected so we will be keeping an eye on this storm so we are prepared for whatever it might bring.

It is a well known fact that tropical storm systems of the last 3 decades have been wetter and have brought more water damage than storms of the past. There are many reasons for this devastation but most scientist point to man-made climate change as the biggest catalyst for the increased rainfall and storm surge witnessed in almost all of the major storms of the 21st century.

As water damage restoration experts we will be prepared for intense weather any time of year. We are available for preliminary assessment of your property before a storm strikes and can even provide preventative measures to stop damage before it happens.