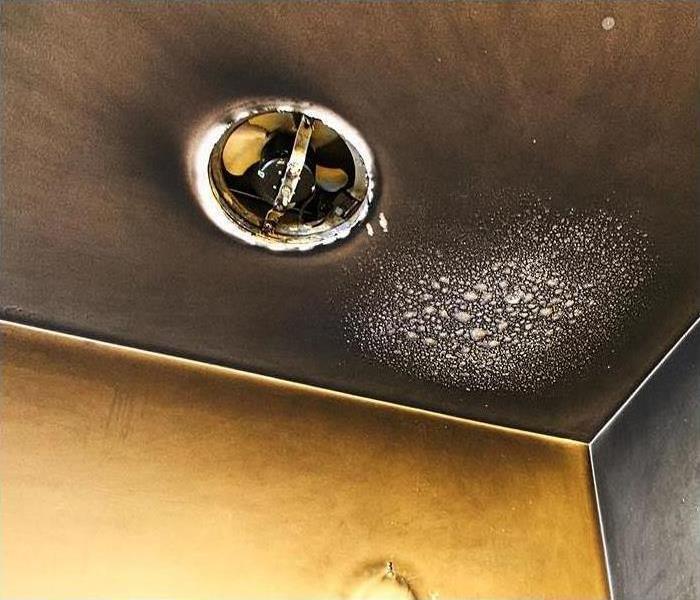 Our specialists are trained in fire and smoke restoration, odor control, upholstery and fabric cleaning, call us right away to prevent further damage.

One of the most deceptively difficult types of fire damage to cleanup happens in the kitchens of homes across the United States. When a protein combusts, the fats become airborne and coat surfaces in the vicinity.

A homeowner in Newport needed help with fire damage cleanup to his kitchen. A pan caught on fire and rather than cover it; someone in the home mistakenly used water to extinguish the fire. When water contacts hot oil, it immediately expands and transforms into a vapor, making the flames spread and more significant loss.

The techs set up containment around the kitchen doorway and vents to ensure no further cross-contamination occurred in the home from soot. Air scrubbers run continuously during mitigation to capture airborne particulate.

SERVPRO technicians found that the cabinets over the stove, sheetrock, and stove required disposal as they were too charred for restoration. Because unhealthy soot particles exist smaller than the eye can see and easily contaminate foodstuffs, much of the food in the pantry got removed as part of the cleanup.

The homeowner assumed his dining set was a loss due to the coverage of soot on the chairs and table in the vicinity of the fire.
Although the set was not of great monetary value, it had significant sentimental value. Upon inspection of the furnishings, SERVPRO techs stated the probability for the restoration of the pieces was high.
The techs wiped away the debris and residues on the chairs and table using specially formulated detergent cleaning agents and sponges. A final buffing removed all signs of the smoke damage.

Once the charred items got disposed of and the remaining surfaces cleaned of all the residues, the kitchen smelled much better but still retained residual smoke odors. SERVPRO techs set up hydroxyl generators to neutralize any remaining odors safely in the home.

SERVPRO of Newport & Bristol Counties at (401) 847-8145 uses the latest technology and advanced cleaning methods to restore properties with fire damage and make it "Like it never even happened."